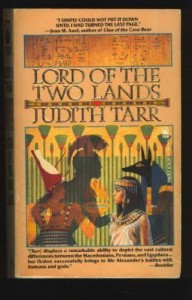 I had read one book by Judith Tarr before this, <i>Lady of Horses</i>--and it wasn't a happy experience. I was most irked by it being one of those stories that thinks creating a strong female character means making almost every male character a jerk, and the novel struck me as more feminist pre-history propaganda than plausible historical fiction. I also remembered the style (especially the sex scenes) as rather graceless. Yet I'd heard good things about Judith Tarr as a historical novelist over the years, so decided to give her another chance--and this is one of her better known books. I'm glad I did. This one I liked rather a lot.

That despite that it called to mind one of my favorite books, or rather a trilogy, and no I don't think it compares--but it probably is unfair to compare them. Tarr herself mentions those books in her afterwards--Mary Renault's novels about Alexander the Great: <i>Fire from Heaven</i>, <i>The Persian Boy</i> and <i>Funeral Games.</i> It's just about impossible to write fiction about Alexander the Great and not be in Renault's shadow. And at first, especially given I hadn't liked the other book by Tarr I tried, that rather made me look at this book with a jaundiced eye. And no, I wouldn't rank this with enduring literature the way I would the Renault books. But for what it is, a historically grounded fantasy featuring not just historical figures such as Alexander and Hephaiston and Ptolemy, but mixed with characters of Tarr's own? Well, I enjoyed this. The story centers around Meriamon, an Egyptian of Royal blood sent to seek out Alexander to make him pharaoh over Egypt and thus liberate them from the Persians. That in itself irked me a bit. Away from the spell Renault wove around me in my teens, it's hard for me to see a conqueror such as Alexander as liberator.

But eventually I took the book on its own terms, its own logic. It helped I liked Meriamon and the magic Tarr built around her. I was entertained throughout--never bored, never exasperated and thrown out of the story. <i>Lady of Horses</i> I never even finished. This held me to the end, and after this I would be willing to try Tarr again. I'd call this three stars rather than four both because I can't help comparing this to Renault and it's not quite so strong I'm <i>eager</i> to read Tarr again--but it was a good read.