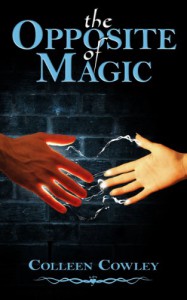 Anything I enjoyed this much I had to give five stars. It’s not five star as in this-changed-my-life or this-is-a-work-of-staggering-genius. More in the sense of I smiled early and often--and that’s how I ended the book too. More in the sense of I made the mistake of starting this late and found myself watching the sun rise because once started I didn’t want to stop. More in the sense that I loved the characters and would like to spend more time with them--if this isn’t the beginning of a series, then I guess I’ll just have to read this again--and again.

The biography on Cowley’s website says that her “favorite sort of fantasy is present-day. Because there’s such possibility in the idea that something magical could be happening right under your nose.” That’s a lot of the charm of The Opposite of Magic. Cowley added that when she first encountered the Harry Potter books in her twenties, she “would occasionally dream” she was at at Hogwarts. And that is what her debut book reminded me of--Harry Potter. In a good way--although I see some playful allusions to it, this isn’t some Harry Potter clone like Riordan’s Percy and the Olympians books.

For one, if this is a Harry Potter, it’s definitely one for grown-ups. Our heroine Emily Daggett is a twenty-something--an adult--one of the faculty at Ashburn College. Even if, especially at first,  she displayed the curiosity and sense of wonder of an eleven-year-old. When she discovered magic she reminded me of that fan in Galaxy Quest when told “it’s all real.” The sharp-tongued Alexander Hartgrave intrigued me from the beginning. The man had a certain flair; as the author put it, “even his compliments were insulting.” He reminded me of Professor Snape--if Snape were an IT director and more sexy than surly. I relished his clashes with Emily.

But really the way the novel is reminiscent of Harry Potter is the whole idea of hidden magic in our ordinary world. The magical system and basic premise itself though isn’t quite like anything I’ve read. But the bottom line is that it’s just such a witty and fun book to read with lots of memorable turns of phrase, great sense of pace and a nicely twisty plot. In the interest of full disclosure, I did receive a free copy of this ebook from the author for early review--but no strings. Truly, a good read--I loved it.