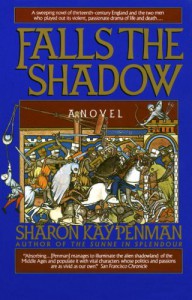 "Here Be Dragons" is probably my favorite Penman novel, with "Sunne in Splendour" it's only rival. "Falls the Shadow" and "The Reckoning" are the two other parts of Penman's "Welsh Princes" Trilogy and I avoided them for years based on the titles and knowledge of its contents alone. "Here Be Dragons" is a rarity among Penman's fiction--essentially a love story, one with a happy, if somewhat bittersweet ending. She makes you fall in love with medieval Wales in that book and knowing history--and seeing those titles, I was reluctant to read the tragic events that caused it to be swallowed by England.

Well, I'm glad I finally caught up with this one, even if it doesn't quite have the place in my heart of my top two favorites--thus four stars instead of five. t have just one more Penman book to read--the sequel to this one continuing the story of one of the characters, Llewelyn ap Gruffudd. So I think I can safely say that for all his flaws, Simon de Montfort, the central character of this book is Penman's most heroic, inspiring figure. Penman calls him in her afterward "Shakespearean" and she paints his virtues and his flaws vividly. Which at the end actually made it harder for me as I drew towards the end. It's not because of flaws in the writing or pacing--rather than the reverse. I know English history all too well, but if I hadn't--well, Penman does all to well in depicting the reasons Montfort was in for a fall. I also think she did better in her later Angevin series about Henry II and Eleanor of Acquitaine in showing a tension between antagonists so your sympathies were pulled in both directions. There's not much appealing here about Montfort's enemies, although from time to time she does make you feel a little sympathy for the hapless, utterly inept Henry III.

I'm both looking forward to and almost dreading reading "The Reckoning." After that one I won't have more Penman to read--only reread. And I doubt there's going to be a happy ending for any character--any historical figure--I care about. Certainly not for Wales. I do know one thing though after having read about a dozen Penman books--it'll be a great ride.